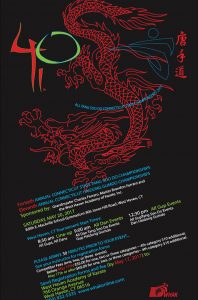 The 40th Annual State Championships hosted By KJN Ferraro and the West Haven Academy of Karate.

For the sixth straight year the championship will be held at the Edith E. MacKrille School Gymnasium. Competition will begin at 9:00am with all dan events.  Gups should report to the gymnasium by 12:00pm for gup forms and sparring competition. Since we know it can be a long day, special attention will be given to running children’s divisions first. Our goal is to have the children’s divisions completed by 3:00pm and the entire tournament completed by 5:00pm.

In the gup divisions we have endeavored to give equal opportunity to men, women, children, and senior students of all ranks. We feel extremely confident that we have successfully met this challenge offering a total of 52 form divisions and 48 sparring divisions, nine gup weapons divisions and this year Kodanja/Dan board breaking divisions. First through third place will be awarded in forms, sparring and weapons divisions. Additionally, every competitor (regardless if they win or not) will receive a special participation award to commemorate their participation in this championship. These unprecedented opportunities for participants to enjoy good quality competition in a healthy and safe environment, have always positioned the Ct. State Tang Soo Do Karate Championships as one of the premier tournaments held in the state of Ct.